You are in Option Strategies»Short Strangle

Short strangle is a non-directional option strategy with two legs. It has unlimited loss and limited profit. 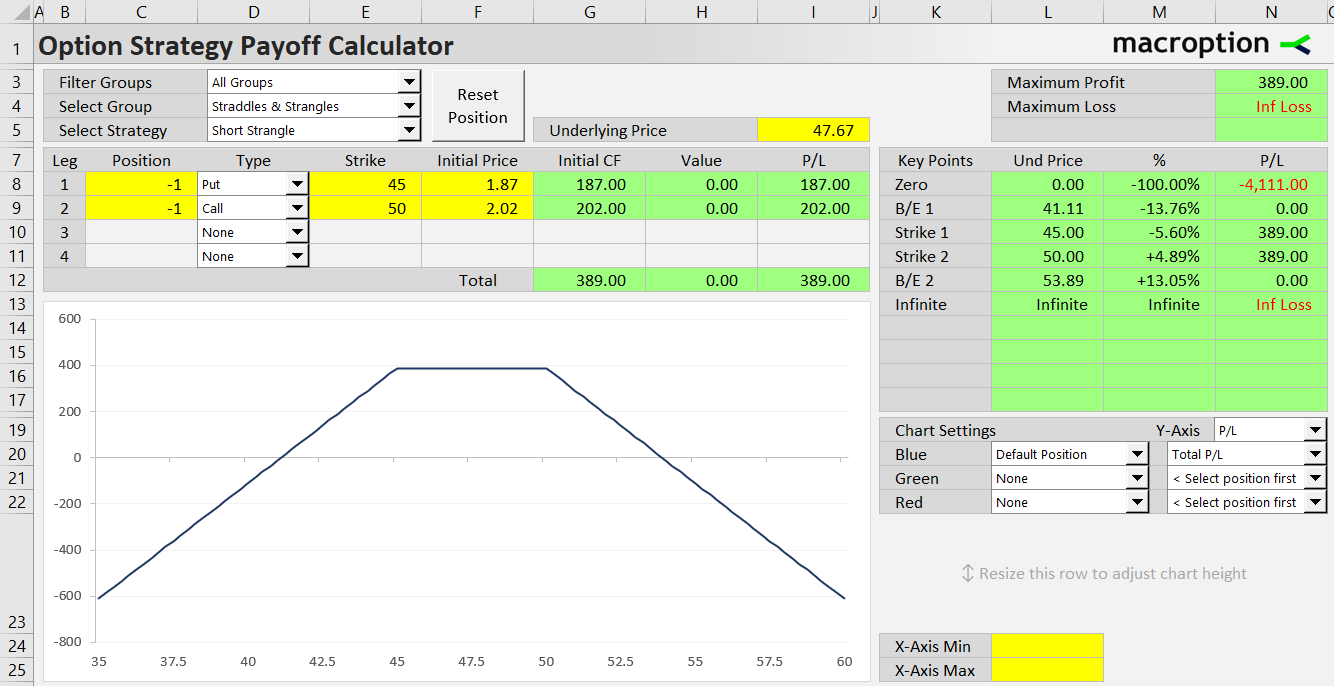 Short strangle is the inverse position to long strangle. It includes two short options, one call and one put, with same expiration date. The defining characteristic of short strangle (and the difference from short straddle and short guts) is that the call strike is higher than the put strike.

To open a short strangle position:

The number of call and put contracts sold must be the same.

Let's say the underlying stock is currently trading at $47.67. If we believe that underlying price will not change must from its current level and/or volatility will decrease, we can set up a short strangle with the following two transactions:

Because short strangle only includes short options, its initial cash flow it positive and equals premium received for both the calls and the puts:

The short strangle strategy is typically used when we expect volatility to decrease and underlying price to not move much.

The payoff diagram looks quite like short straddle, only with a gap between the call and put strike. Between the strikes, total profit is constant (horizontal line). Above the (higher) call strike and below the (lower) put strike, the P/L line decreases and eventually crosses into the loss territory.

The best case scenario is that underlying price stays between the two strikes at expiration and both short options expire worthless. We keep the entire premium received at the beginning. This is the maximum possible profit.

The further underlying price moves from the strikes, either up above the call strike or down below the put strike, the smaller the profit or (eventually) greater the loss. Maximum loss is unlimited, as underlying price can theoretically go to infinitely high levels.

On the downside, maximum loss is limited by underlying price falling to zero:

There are two break-even points: one below the put strike and the other above the call strike. It is always the underlying price at which the respective option is in the money by an amount equal to premium received for both options.

The position's risk profile is greatly affected by strike selection. It has two parts. Strike location relative to underlying price affects the position's directional exposure, while width of the gap between the two strikes decides the size of maximum profit and width of the profit window (and thereby probability that the trade ends up profitable).

The most common approach when opening a short strangle position is for the call and put strikes to be approximately the same distance from current underlying price (in other words, underlying price is about halfway between them). This makes the position neutral in terms of underlying price direction (delta is close to zero).

If we consider a move to one side more likely than to the other, short strangle can be set up with directional bias by choosing one strike closer to the underlying price than the other.

Conversely, strikes 40 and 45 would create a bearish short strangle.

There is a trade-off:

Choosing wider gap between strikes makes maximum profit smaller (because the options are further out of the money when we sell them at the beginning), but more likely (because the window of profit is wider).

An extreme case of this is the short straddle strategy, where both strikes are the same, maximum profit is higher than with short strangle, but it is only reached at one point – exactly at the strike.

When opened with underlying price halfway between the two strikes, short strangle is approximately delta neutral.

The above mentioned relationship between underlying price and delta indicates that losses accelerate, while profits slow down. Short strangle has negative gamma, as it only includes short options.

Theta is positive, as the short strangle position benefits from loss of the short options' time value.

The main motivation for a short strangle trade is often a decrease in implied volatility. The position has negative vega – it profits when volatility goes down.