You are in Option Strategies»Short Guts

Short guts, similar to short strangle but with put strike higher than the call strike, is a non-directional option strategy with two legs. It has potentially unlimited loss and limited profit. 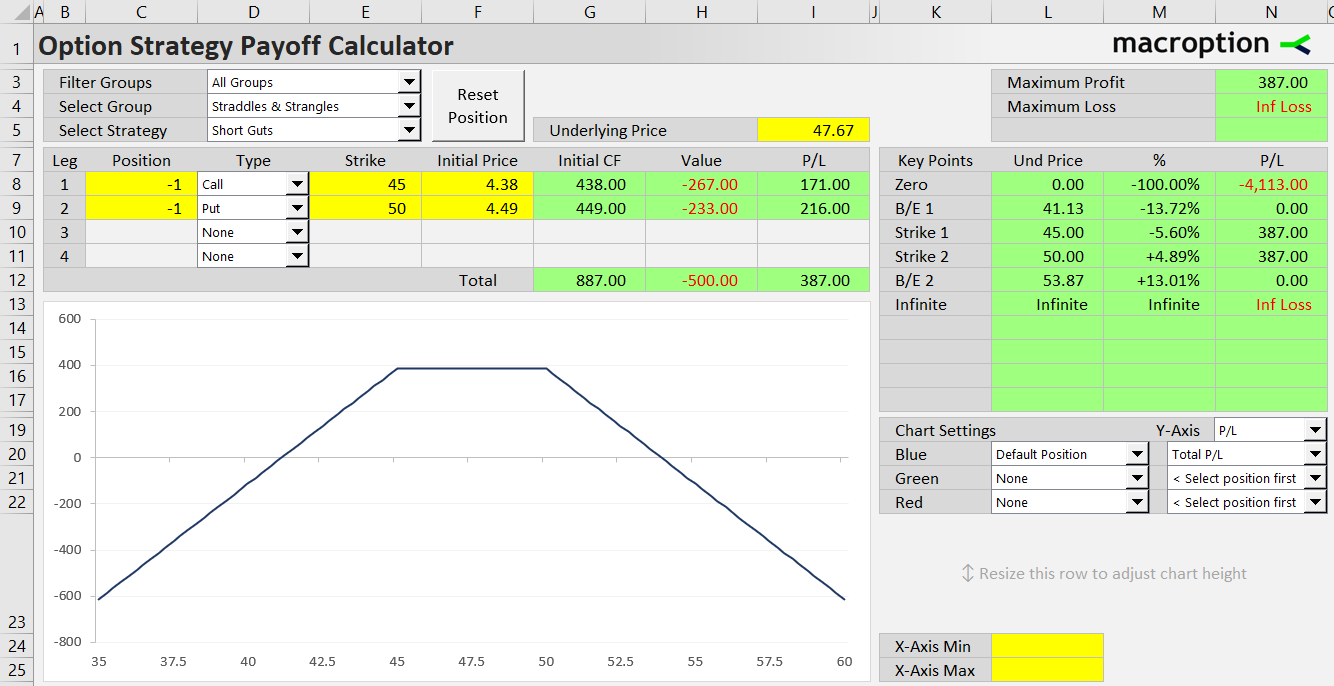 Short guts is the inverse position to long guts and a strategy similar to short strangle. It includes two short legs, both with the same expiration date, one call and one put. The difference from short strangle is that the put strike is higher than the call strike.

Let's say the underlying stock is trading at $47.67. A short guts position can be created with the following two transactions:

Short guts is a credit strategy, because initially we sell both options and receive the premium for both:

Compared to short strangle or short straddle, the cash received at the beginning is higher, because both options are in the money and therefore more expensive.

That said, unlike short straddle or short strangle, there is always a certain cash outflow at expiration, because at least one of the options (and possibly both) is always in the money.

The payoff diagram is the inverse to long guts and looks the same as short strangle.

Because the call strike is lower than the put strike, both options are in the money when underlying price is between the strikes (a call option is in the money above its strike, a put option below its strike).

This area is also where the long guts strategy reaches maximum profit. Although both options are in the money, it is only by a small amount. In fact, anywhere between the strikes, the sum of the call and put intrinsic values (the amounts by which the options are in the money and the amount lost at expiration in the best case scenario) is always equal to the distance between the two strikes.

Adding up the positive initial cash flow and the best case outflow at expiration, we get maximum profit:

This is of course the same as maximum loss of long guts, the inverse position.

Because the short guts strategy is net short call options, its loss is unlimited, as underlying price can theoretically go to infinitely high levels.

The higher underlying price rises above the higher (put) strike, the greater the loss, as the short call gets deeper in the money (the short put expires worthless).

On the other side, below the lower (call) strike, the call option expires worthless, but the short put option increases its value (and thereby the position's total loss) as underlying price falls. Because the price of most underlying assets can't fall below zero, the loss is limited on the downside, but it can be very large:

The trade does not turn to a loss immediately at the strikes. That happens at the point where one of the options (call on the upside, put on the downside) gets in the money by exactly the same amount as the initial cash flow received for both options.

Short guts strategy has two break-even points, one below the lower (call) strike and the other above the higher (put) strike. The calculation of break-evens is the same as for long guts, the inverse position:

In our example, the break-even prices are: