You are in Option Strategies»Covered Short Strangle

Covered short strangle (also just covered strangle) is a bullish option strategy with three legs. It has limited loss and limited profit (although the loss can be very large if underlying falls a lot). 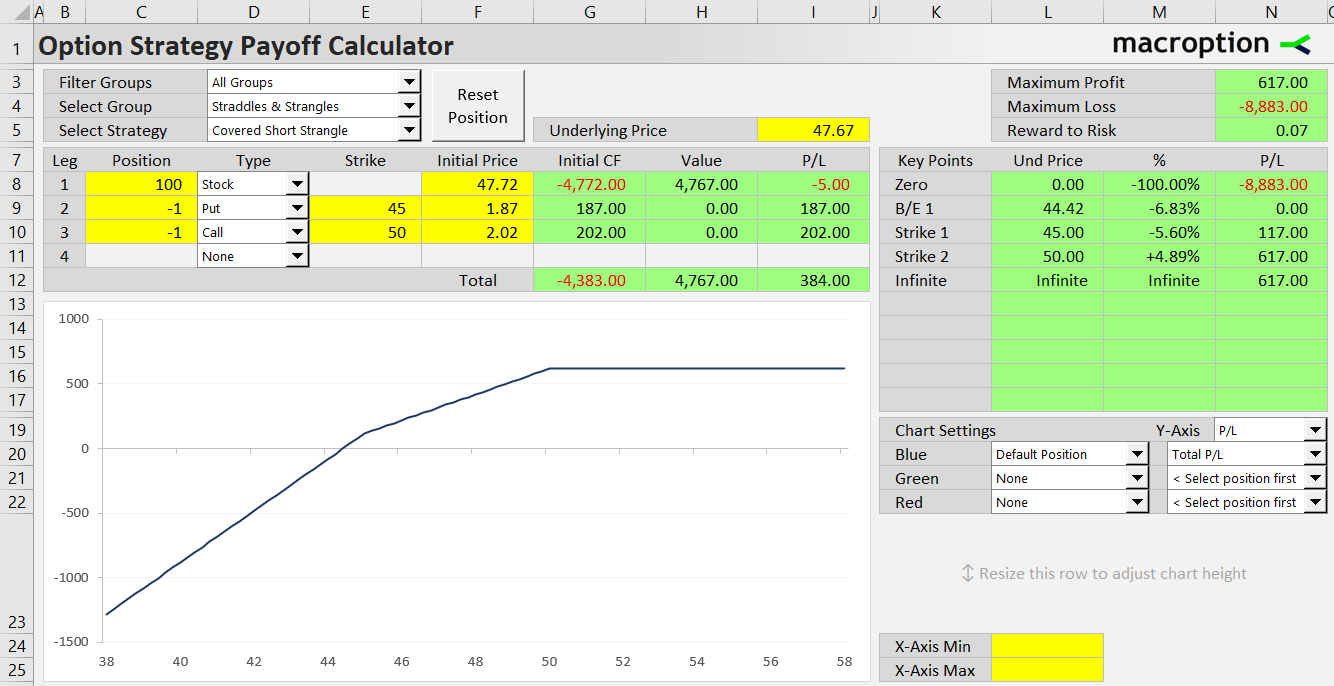 Consider a stock currently trading at $47.72. We can set up a covered short strangle position using the following transactions:

Opening the position requires large initial cash payment for the shares. Premium received for the options covers only a small fraction of it.

The word "covered" in the strategy name can be misleading. The long underlying position does hedge the short strangle against large increase in underlying price, but that protection comes at a cost: on the downside, when the underlying falls below the put strike, losses grow at double the pace compared to plain short strangle. For every dollar the stock price decreases, we lose one dollar per share on the short put and another on the long stock.

Maximum profit from covered short strangle is reached when underlying price ends up at or above the (higher) call strike at expiration. The short put expires worthless. The short call is in the money, but any losses from further price increase are exactly offset by increasing value of the long underlying position.

The worst case scenario is when underlying price drops to zero and the position loses a sizable amount on two out of its three parts: on the long underlying position (which is worthless now) and on the short put (which is deep in the money). Only the short call leg expires worthless and makes a profit, but that is too small relative to the losses on the other two legs.

The strategy has one break-even point (the underlying price where total outcome turns from profit to loss and vice-versa). It is the point where initial option premium received (for the short call and short put) equals amount lost on the long stock plus the amount by which the short put is in the money.

Depending on the relative size of total option premium received, initial stock price, and the (lower) put strike, the break-even can be either above or below the put strike.