You are in Option Strategies»Long Strangle

Long strangle is a long volatility option strategy with two legs. It has limited loss and unlimited potential profit. 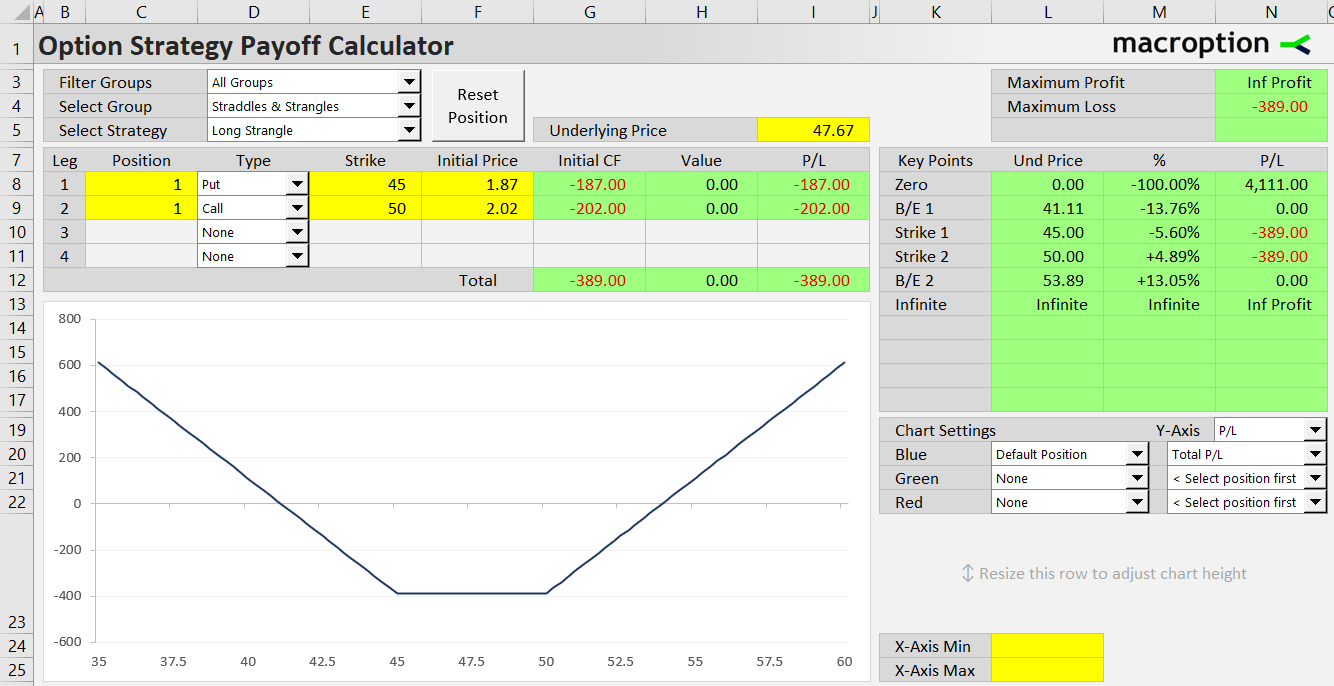 A strangle is a combination of a call and a put on the same underlying, with same expiration date, same position size and direction.

Long straddle includes a long call option and a long put option. Unlike in long straddle, the strikes are different and the long call strike is always higher than the put strike.

To create a long strangle position:

Usually the distance of the two strikes from underlying price at time of opening the strangle position is about equal and both options are out of the money.

If the underlying stock is currently trading at 47.67, we can set up a long strangle using the strikes 45 and 50, so underlying price is about halfway between them:

Long strangle is a debit strategy, because we are buying options. Initial cash flow equals the premium paid for both options: in our example, $187 for the put plus $202 for the call, which is $389 for the entire strangle.

The cost to set up a strangle is lower compared to long straddle, as both options are out of the money and therefore cheaper.

The main disadvantage of long strangle compared to long straddle is that the position requires a greater underlying price move (to either direction) to become profitable.

It is a long volatility strategy, whose objective is that the underlying moves fast enough (before the options expire) and far enough – either up above the long call strike or down below the put strike.

In long strangle payoff diagram, maximum loss occurs between the two strikes. Below the put strike and above the call strike, the payoff grows in a linear way.

The worst case scenario with a long strangle is that the underlying does not move and stays between the two strikes. Then both options will remain out of the money and expire worthless. Maximum loss equals the premium paid for both options (initial cost of the position), in our example $389 per contract.

The best outcome is when underlying price moves far beyond one of the strikes. Either is falls below the put strike or rises above the call strike.

Because there is no cap on possible profit, risk-reward ratio is infinitely favorable.

For long strangle to become profitable, underlying price must not only get beyond one of the strikes. It must get far enough, allowing one of the options to get deep enough in the money that its value pays for initial cost of both options.

Long strangle has two break-even points: one below the put strike and the other above the call strike. The distance of each breakeven price from the respective strike equals premium paid for both options.

In our example, the break-evens are:

The gap between the two break-even points and width of the window where long strangle outcome is a loss depends on the strikes. Additionally, strike selection also affects initial cost.

Choosing strikes which are further apart has the following effects:

Secondly, break-even points are further away. The position requires a greater move in underlying price to turn profitable. Probability of profit is smaller (other things being equal).

Choosing strikes closer to one another has the opposite effects. The smaller the strike distance, the more the position resembles long straddle.

Strike selection also affects directional exposure, measured by delta. The most common way to trade long strangle is to choose strikes which have similar distance from the underlying price when entering the position. This makes the strangle delta neutral.

For example, when underlying price is at 47.67, a strangle with strike 45 and 50 will be approximately delta neutral.

Alternatively, we can select one strike closer than the other to make the strangle slightly directional.

When the call (upper) strike is closer to underlying price, the position has positive delta and bullish bias. For example, strikes 42.50 and 50 would make a bullish long strangle.

Conversely, when the put strike is closer (e.g. 45 and 52.50), total delta is negative and the position is bearish.

This also applies to an existing position. As underlying price moves away from the midpoint between the two strikes, total delta changes. It becomes positive when underlying price goes up, and negative when down.

Long strangle has positive gamma. This means delta always changes favorably to the position (profits accelerate, while losses slow down).

Gamma is highest between the two strikes, as options generally have highest gamma at the money.

As underlying price rises further above the call strike, the long put option gets too far out of the money and has diminishing effect on the overall position, which starts to behave like a deep in the money long call. Gamma declines to zero and delta approaches +1.

On the contrary, below the put strike, the strangle is mainly affected by the put option. Gamma gradually falls to zero and delta approaches -1.

Time is the greatest enemy to a long strangle position. Because it only includes long options, it has negative theta and loses value with passing time.

Like gamma, option theta is greatest (most negative) at the money. As underlying price moves above the call strike or below the put strike, long strangle total value diminishes and so does theta.

Being a long volatility strategy, long strangle has positive vega and generally benefits from rising volatility.