You are in Option Strategies»Long Guts

Long guts, similar to long strangle but with put strike higher than call strike, is a long volatility option strategy with two legs. It has limited loss and unlimited potential profit. 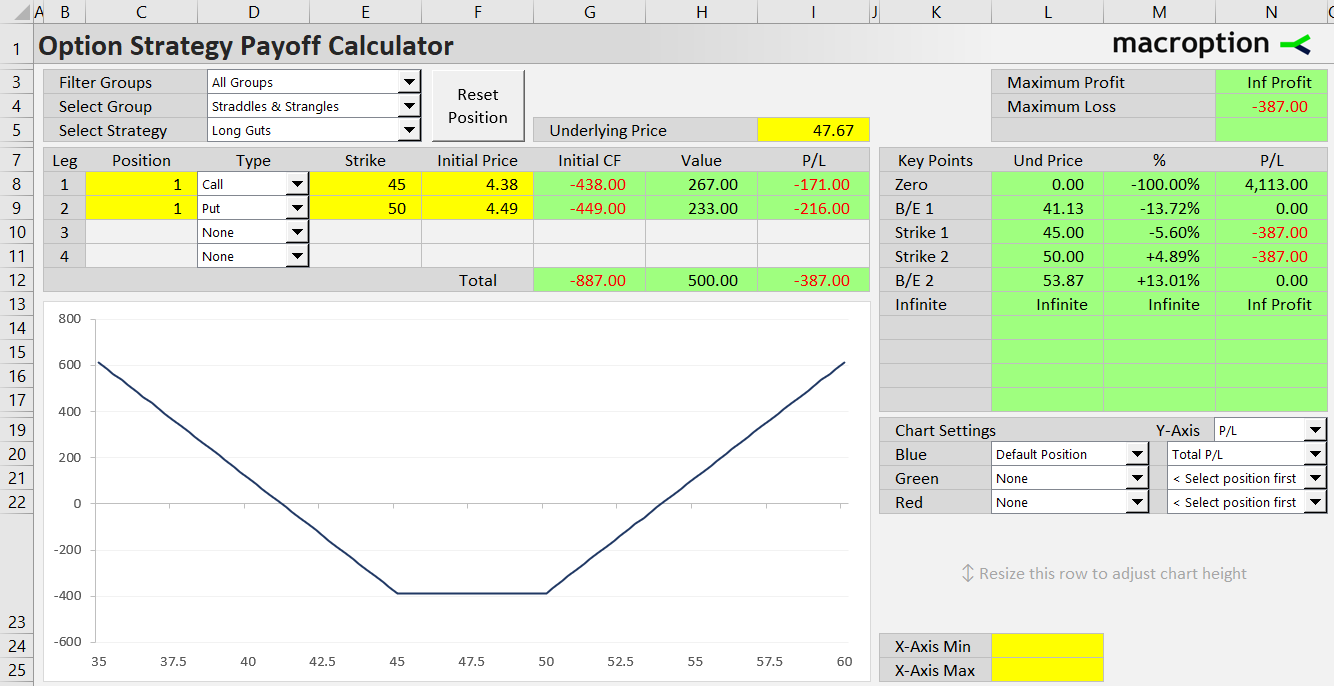 The guts position is one of option combinations, involving call and put options with the same direction (long or short), quite like straddles and strangles.

Long guts strategy has a risk profile very similar to long strangle, with only one small difference in setup: the order of strikes.

Everything else is the same as in long strangle (same underlying, same expiration, same direction, and same position size of calls and puts).

To set up a long guts position (with current underlying price at $47.67):

Like long straddle and long strangle, long guts is a debit strategy, as it only includes long options. Initial cost is the sum of call and put option premium paid.

The payoff diagram looks exactly the same as long strangle.

Maximum loss occurs between the strikes (and exactly at either strike). However, while in long strangle both options expire worthless, in long guts both options are in the money – just not enough to pay for the initial cost in full.

With underlying price going up, the (lower strike) call option's intrinsic value increases by the same amount as the put value decreases. Between the strikes, the sum of both options' values at expiration is always equal to strike distance. This is why total P/L is constant between the strikes.

If underlying price gets above the higher (put) strike or below the lower (call) strike at expiration, one of the options expires worthless, but the other option becomes more valuable (the more the further the underlying moves away from the strikes).

Total outcome of the trade starts to rise from the maximum loss and eventually turns to profit. On the upside (call option in the money), potential profit is unlimited. On the downside (put in the money) it is only limited by underlying price falling to zero.

On either side, the break-even price is where the in the money option's value equals initial cost of the entire position:

In our example, the two break-even points are:

There are two parts when deciding the strikes for a long guts trade: where (relative to underlying price) and how wide (gap between the two strikes).

For the first part, the most common approach is to choose such strikes that underlying price is approximately halfway between them when opening the position. This is the same as in long strangle. It makes the position directionally unbiased (delta neutral), at least in the beginning.

Choosing one strike closer to underlying price than the other creates a directional bias.

For example, with underlying price at 47.67, the strikes 42.50 and 47.50 would be bullish, as the lower strike call option would be deep in the money and its high delta would push total delta to positive territory.

Conversely, the strikes 47.50 and 52.50 would create a bearish position, as the put option's negative delta would prevail.

Choosing wider gap between strikes leads to the following:

Initial cost is higher, as both options are deeper in the money.

Break-even points are further away, making probability of profit lower.

Overall, strike distance has the same effect as long strangle strike distance, only through a slightly different mechanism (due to the reversed order of strikes) and with the opposite effect to initial cost.