This page explains bull put spread profit and loss at expiration and the calculation of its maximum profit, maximum loss, break-even point and risk-reward ratio. 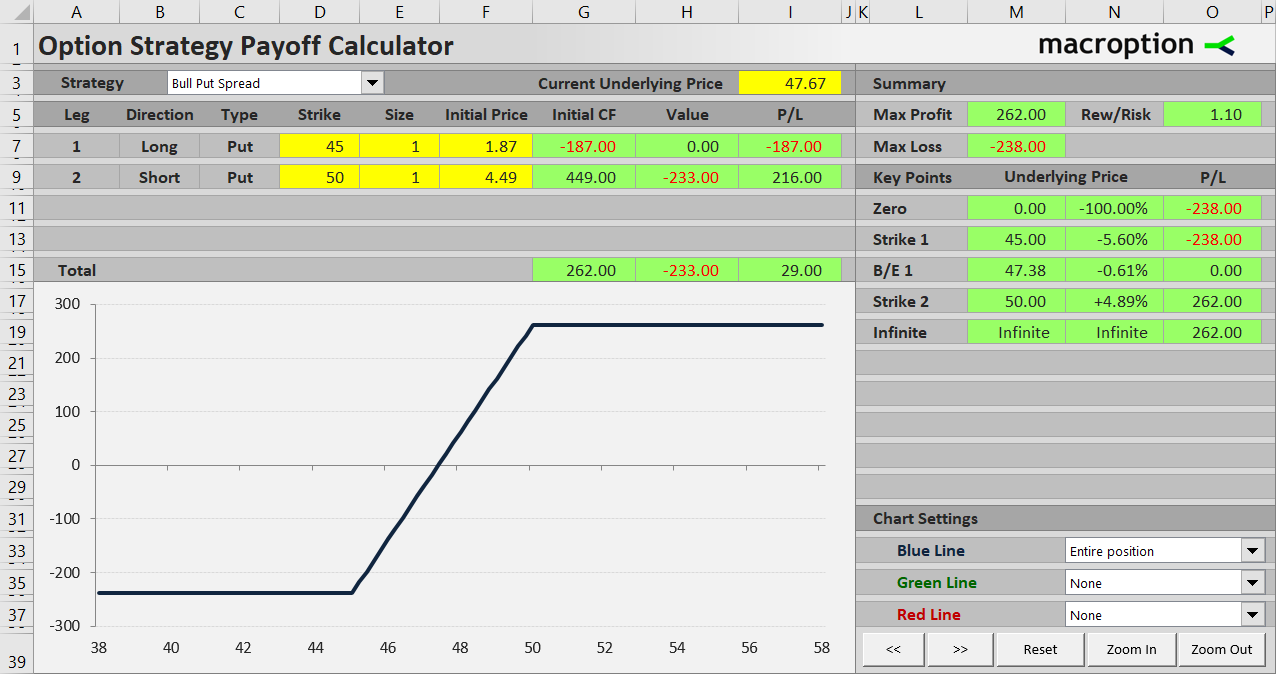 Unlike bear put spread and unlike bull call spread (which is also bullish and has a similar payoff profile), bull put spread is a credit spread, which means the cash flow when opening the position is positive. This is because the higher strike put that you sell is typically more expensive than the lower strike put that you buy. However, the trade typically comes with margin requirement.

The objective of a bull put spread trade, as with other credit spreads, is to defend the premium that you have received. In an ideal case, the underlying price goes up and ends up above both the put options’ strikes at expiration, making both the options worthless – the overall outcome of the trade is therefore the initial cash received. The worst case scenario is that underlying price ends up below both strikes, resulting in a loss that corresponds to the difference between the two strikes, less premium received.

Let’s illustrate the profit and loss profile on an example.

Consider a position made up of two legs (options):

Note that this is exactly the other side of the trade we have used for the bear put spread example. This time, we want the underlying price to increase and both the put options to get out of the money. If we hold the position until expiration, there are three possible scenarios.

The worst case scenario is that we are wrong and the underlying price goes down, getting below both options’ strikes at expiration (for example $42). Both options are in the money. You will be assigned the higher strike put and lose $50 – $42 = $8 per share, or $800 for one option contract. However, the lower strike put which you have bought acts as a hedge and limits the loss. It is in the money by $3 per share ($45 – $42) and reduces the loss by $300. In total, you lose $500 at expiration (the difference between the two strikes = $5 per share), but you have received $262 in the beginning, so the total loss is $238. Again, note that this trade’s maximum loss scenario is the same as the maximum profit scenario from the bear put spread example, just inverse.

Maximum loss from a bull put spread trade is equal to difference between strikes minus net premium received. It applies when underlying price ends up at or below the lower strike.

The best case scenario is again the inverse of the worst case scenario from the bear put spread example. If underlying price ends up above the higher strike, both options expire worthless and there is zero cash flow at expiration. You still keep the premium received when opening the position ($262), which is the maximum possible profit from this trade.

Maximum profit from a bull put spread is equal to premium received in the beginning. It applies when underlying price ends up above the higher strike and both options expire worthless.

Scenario 3 (Between the Strikes) 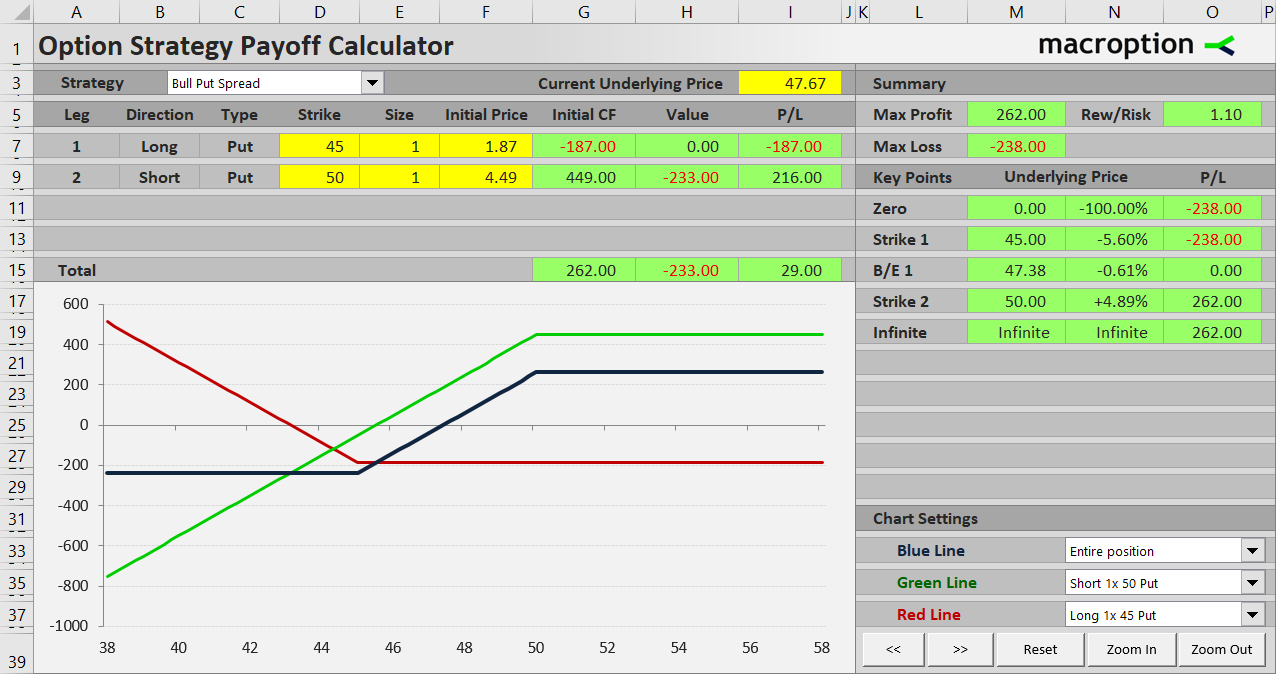 Below $45 both options are in the money, but changes in their values exactly offset one another and total P/L is a constant loss.

Between $45 and $50 the lower strike long put is worthless and total P/L grows as underlying price increases as the higher strike short put declines in value (grows in profit).

Above $50 both options are out of the money and total profit equals initial net premium received.

Because bull put spread is the other side of bear put spread, break-even price is the same – only profit for one side is loss for the other and vice versa.

General formulas for bull put spread risk and reward are as follows:

We have already mentioned that bull put spread is the other side of bear put spread.

It has similar payoff to bull call spread. The main difference is that bull call spread uses calls rather than puts and it is a debit spread (negative cash flow on position entry).

Bull put spread can be considered a hedged version of short (naked) put. The difference is the lower strike long put, which reduced premium received and therefore reduced profit potential, but protects the position from extreme drops in underlying price. Distance between the two strikes determines how conservative or how risky a bull put spread is – the wider the gap, the more risk. In fact, a plain and simple short put can be considered something like a bull put spread where the lower strike is zero.

You are in Tutorials » Option Strategies

You are in Tutorials