This page explains bear put spread profit and loss at expiration and the calculation of its maximum profit, maximum loss, break-even point and risk-reward ratio. 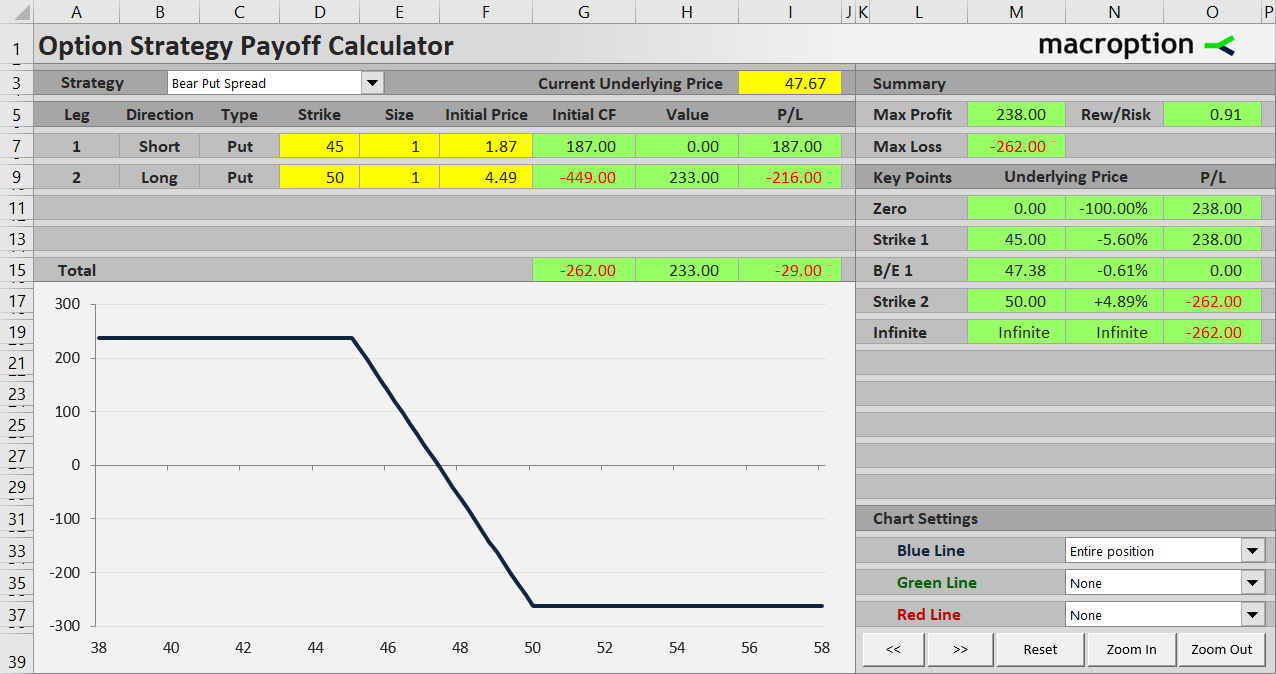 An alternative name for this option strategy is long put spread, which might be a bit confusing. It does not refer to the underlying price exposure (which is bearish, so the word short would come to mind), but to the position in the put options themselves: you are long the higher strike put, which is typically more valuable and has a greater effect on your P/L than the short lower strike put – so you are basically “net long” put options. If you are still confused, see a more detailed explanation here.

The trade has limited risk and limited profit potential. We will look at the payoff profile and the different scenarios below, using an example.

If you hold the options until expiration, there are three possible scenarios.

Let’s start with the worst thing that can happen. When your expectations about the underlying price direction are wrong and the underlying ends up above both strikes (in our example above $50), both put options will expire worthless. The value of the position at expiration will be zero. The total outcome of the trade will be equal to the initial cash flow, which in our example is negative $262.

Maximum loss from a bear put spread trade is equal to initial cost and applies when underlying price ends up at or below the higher strike.

The good thing is that the risk is limited. Regardless of how high the underlying will get at expiration, your loss is still the $262 you paid in the beginning.

Maximum possible profit from a bear put spread is the difference between the two strikes minus initial cost. It applies when the underlying ends up at or below the lower strike.

Scenario 3 (Between the Strikes)

The chart below shows total profit or loss (blue) and contribution of the two options – the long higher strike put (red) and the short lower strike put (green). 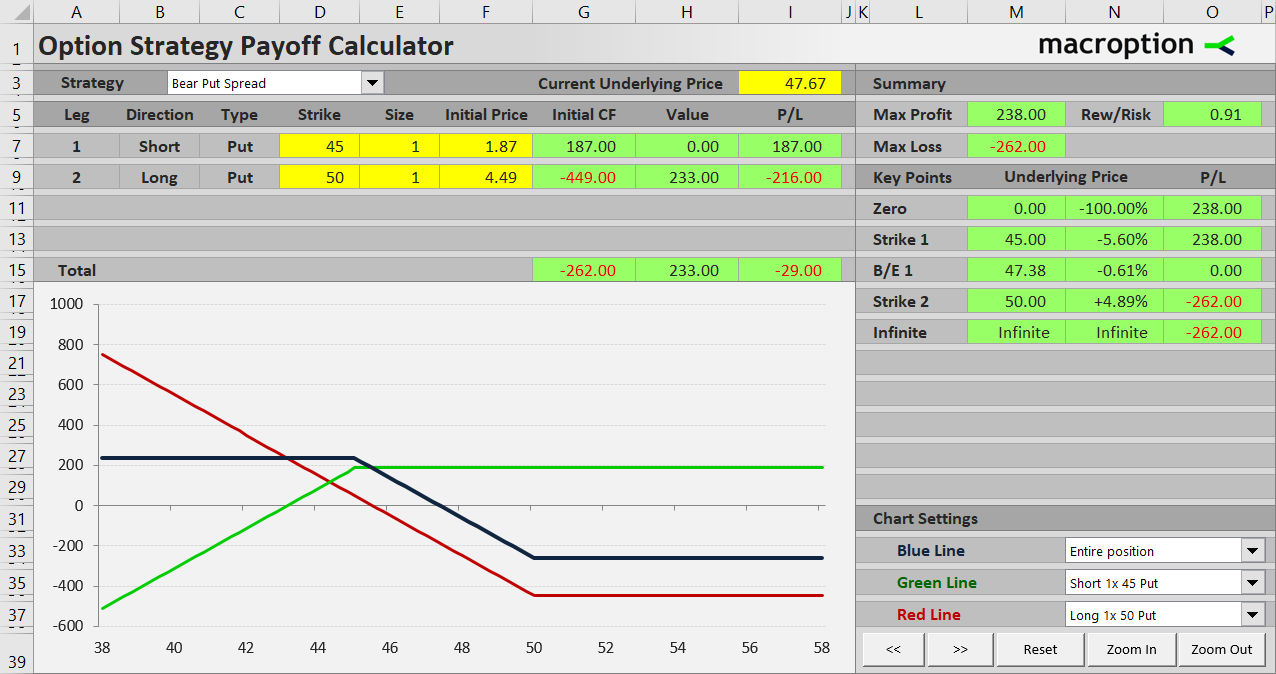 Above $50 both options are out of the money. Total loss is constant and equal to initial cost, or maximum risk of the trade.

Between $45 and $50 total P/L rises as underlying price declines and the higher strike put becomes more valuable. The lower strike put is still out of the money.

Below $45 both the options are in the money and their values continue to rise as underlying price decreases. But their payoffs exactly offset one another and total P/L remains constant, equal to maximum possible profit.

The break-even point – the exact point between the two strikes where the total P/L turns from loss to profit, or vice versa – is very easy to calculate. It is the underlying price that makes the higher strike put option’s value exactly equal to the initial cost of the entire position.

The general formula for bear put spread break-even point is:

Another useful statistic which gives you an idea about a potential trade’s payoff profile is the risk-reward ratio, calculated simply as the ratio between maximum possible loss (risk) and maximum possible profit (reward).

We have already calculated the two for our example: maximum risk is $262 (initial cost of the position, scenario 1) and maximum profit is $238 (scenario 2).

Different people like to express the risk-reward ratio in different ways. If you like the “risk:reward” format, it is 262:238 or 1:0.91. I like to express it as a single number – reward as multiple of risk, which in our case is 0.91.

The general formulas for bear put spread risk and reward are the following:

Bear put spread payoff profile is similar to bear call spread, which uses call options instead of puts and it is a credit spread (net positive initial cash flow).

Bear put spread is often considered a cheaper and less aggressive alternative to the plain and simple long put, which is effectively a bear put spread without the short lower strike put. The main advantages of bear put spread over long put are lower initial cost (because the lower strike put you sell helps pay for the more expensive higher strike put) and therefore higher break-even price and higher probability of profit. The main disadvantage is limited profit potential (maximum profit of a long put is also limited as the underlying can’t drop below zero, but typically much higher than a spread’s maximum profit).

A bear put spread’s profit potential, break-even point and risk-reward ratio vary with selection of different strikes – if you choose a far out of the money strike for the short lower strike put, both initial cost and maximum potential profit will be higher and the payoff profile will be similar to a long put.

You are in Tutorials » Option Strategies

You are in Tutorials