The correlations were calculated from daily returns over a 6 month rolling window (126 trading days to be precise). If you are not familiar with the concept of correlation, you can see basic interpretation here.

Correlation of SPY and FXE

The correlation between SPY and FXE (CurrencyShares Euro Trust ETF, tracking EUR/USD exchange rate) reached 0.75, highest since FXE introduction back in December 2005. This probably reflects the fact that it is news from Europe what’s getting the headlines and driving short-term sentiment on global markets in these days (typical scenario: good news from Greece & Eurozone, EUR/USD rises, equities rise vs. bad news, EUR falls, equities fall). 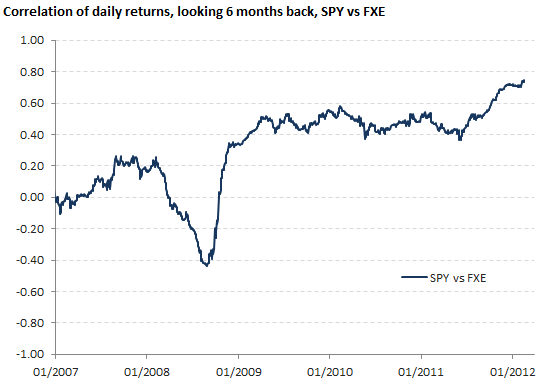 SPY Correlation to FXB and FXF

The correlation of SPY to FXB (ETF tracking the value of British Pound) and FXF (Swiss Franc) also increased. 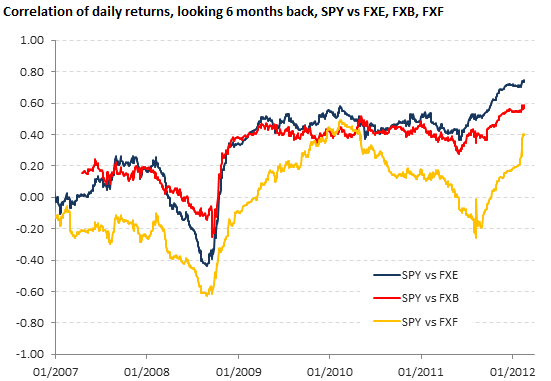 Correlation of FXE and FXB, FXF

The correlation between FXE and FXB has been showing a very steady high positive level for years, not leaving the 0.50 to 0.80 range.

Not surprisingly, Swiss Franc is historically even more tightly correlated to the Euro, with FXE-FXF correlation above 0.80 for most of the last several years. However, 2011 was an exception, as Swiss Franc decoupled from the Euro and became a very specific story of its own, with its sharp appreciation in Q2 and July 2011, speculations concerning possible interventions by Swiss National Bank in summer, and the actual act by SNB in early September (on 6 September the SNB announced a minimum EUR/CHF rate of 1.20 which it intended to protect through buying foreign currencies “in unlimited quantities”).

SPY-FXY Correlation Up from Negative Territory for the First Time

Over years we were used to seeing Japanese Yen (once rare at being a virtually zero interest currency) moving in the opposite direction to equities and risk assets. This has not been the case in the last several months, at least according to correlation statistics of SPY and FXY (Japanese Yen ETF). For the first time since the introduction of FXY ETF in February 2007, the correlation of daily returns of SPY and FXY measured over a 6 month period got above zero, standing at 0.21 on 17 February market close. This of course is still too low to be really called positive correlation, but the traditional negative correlation is gone, at least for a while. The fundamentals and news coming from the Japanese economy have also shown a rather mixed picture recently (debt, trade balance, the 2011 earthquake) and it will be very interesting to watch the Yen and its relationships to other macro markets in the coming months. Maybe there will be a very different Yen. 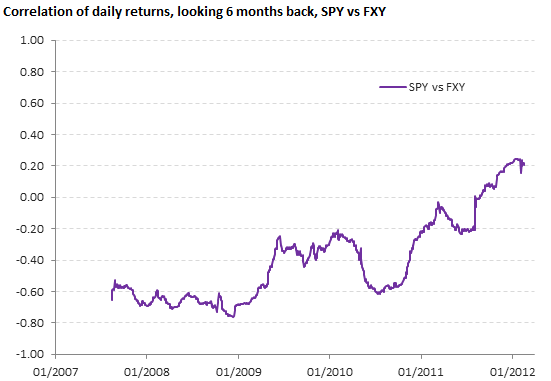 Correlations of SPY to FXA and FXC Remain High

Correlations of SPY to FXA (Australian Dollar ETF) and FXC (Canadian Dollar ETF) have been high for several years. AUD and CAD (together with NZD and contrary to the above mentioned JPY) are currencies of commodity exporting countries and they have historically shown tight correlations to commodity prices and risk assets in general. FXA and FXC have also been tightly positively correlated to one another. 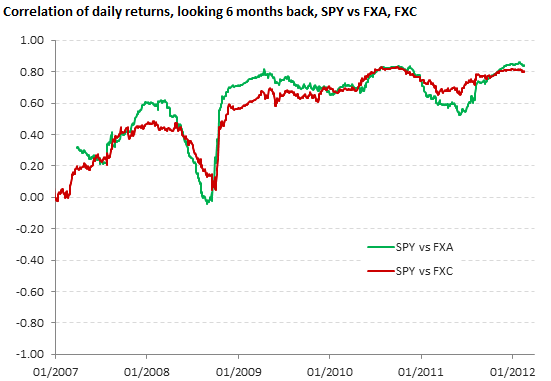 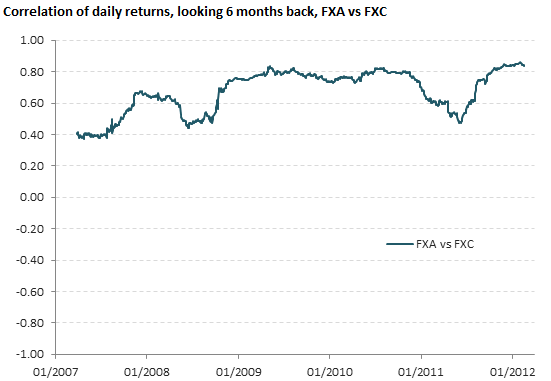 Having seen the charts above, it is no surprise to see the correlation of SPY and UUP at record low levels (-0.77). UUP is an ETF tracking the US Dollar Index, an index measuring the value of US Dollar relative to a basket of six other currencies (EUR with share over 50%, JPY, GBP, CAD, SEK, and CHF). 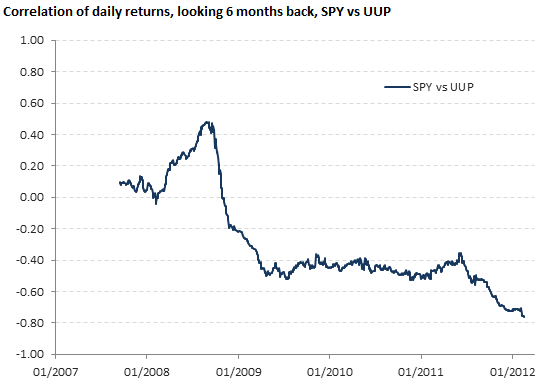