VIX Sideways in Narrow Range, But Futures and VVIX Higher

It has been like this for quite a while and soon some equity investors will forget how a correction really looks like (which is exactly when a real correction will happen I suppose). The group of major equity benchmarks reaching new all-time highs, multi-year highs, or other psychological milestones, has most recently been joined by the FTSE 100 (surpassing its 2007 high to close highest since September 2000) and Russell 2000 (hitting 1000 for the first time).

By the way, S&P500 at 1666 is exactly one thousand points from the March 2009 “devil” low of 666 (which is probably one of the useless pieces of market statistics that Team Macro Man are referring to in their latest post).

VIX near Lows, Sideways, and in a Very Narrow Range

The recent action (or rather the lack of it) in the VIX can be characterized by another piece of statistics with limited predictive power: The spot VIX has been in a narrow 1.27 point (12.26-13.53) range in the last 12 sessions (since 3 May). This has not happened since April 2006 (VIX was in the high 10’s and 11’s at that time). Furthermore, if we exclude the Friday dip to 12.26 (which could be attributed to the “weekend effect” to some extent), the range since 3 May would be only 1.04 points.

The VIX will certainly break out of that range and I would expect that to happen sooner rather than later, but the question remains which direction. There is some room and good reasons on either side. The prospects (especially potential size of the move) are better on the long VIX side, but that is also why being long VIX costs money over time. Before you go and buy VXX or UVXY because “VIX is low”, make sure you know which kinds of exposures these products represent. Which brings us to VIX futures and longer-term volatility expectations…

It is not all sideways here. The VXV index, which measures 3-month implied volatility of S&P500 options (compared to 30 days on the VIX), has been growing since its 6 May / 7 May lows. The magnitude of the move is not dramatic (about 1 point), but there is a remarkable difference between the stagnating volatility expectations for the short term (VIX) and the rising ones for the medium term (VXV).

The rising volatility expectations going further into the future are also obvious on the VIX futures curve, which has significantly steepened since 7 May. The long end added almost 1 point, while the spot VIX was sideways and the front month converged to the spot with approaching expiration (last trading day is today). 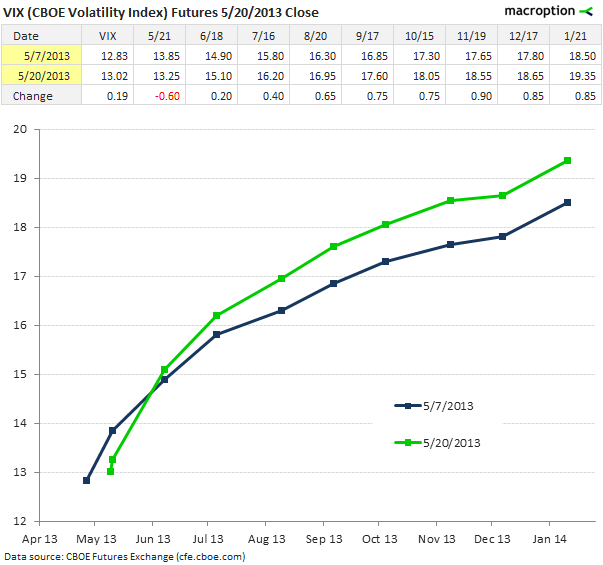 May VIX futures lost most of the premium over the spot as expiration approached:

June VIX futures, which will become the new front month this week, also lagged behind the longer term contracts, but managed to stay above the 7 May low. Keep an eye on this contract if you are trading VXX or UVXY now.

September VIX futures rose about 0.80 from the 7 May low. It looks similar on the other longer-term VIX expirations.

In line with the futures and VXV (and not in line with the spot), the VVIX (the VIX of VIX, measuring implied volatility of VIX options) increased from its 7 May low of 77 to 85 at yesterday’s close.

Bottom line: There is much more going on in the SPX/VIX volatility universe besides what you can see on the headline spot VIX number. The recent days have provided a good example of that. The spot VIX might seem boring and complacent at the moment, but VIX futures and options have shown some moves.

Two noteworthy points when looking at the recent rise in VIX futures and VVIX: 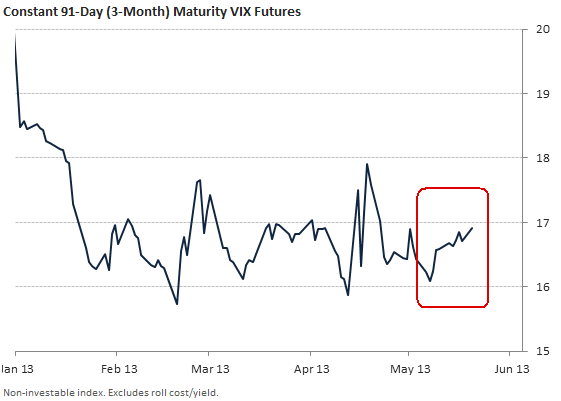 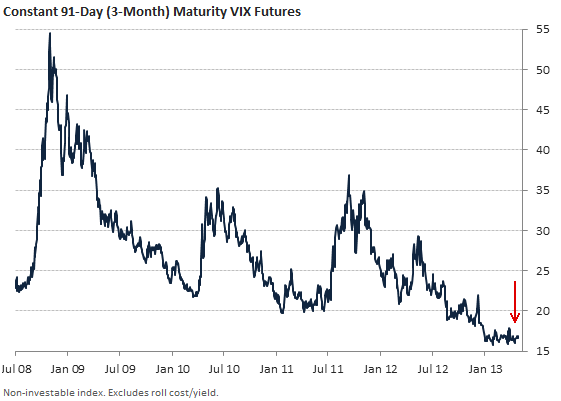