VIX and S&P500 in the Same Direction

You are in Tutorials and Reference»VIX and Volatility Products

While negatively correlated, VIX and S&P500 still move in the same direction approximately 20% of time. This page provides some details.

The common rule of thumb is that VIX and S&P500 tend to move in opposite directions: VIX rises when equities decline and vice versa. 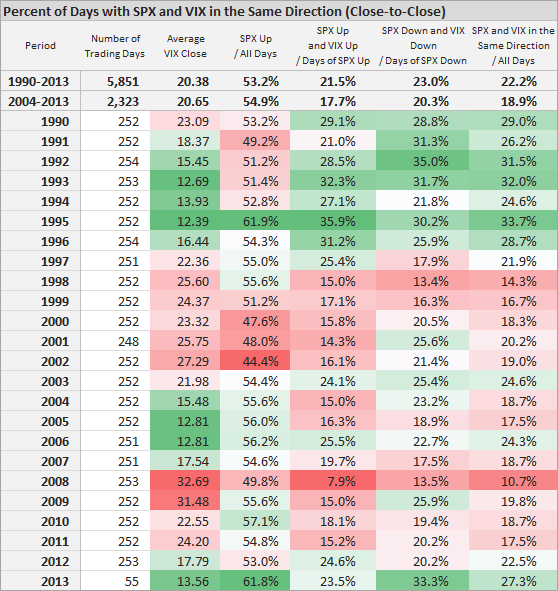 You can see in the table above that the percentage of same direction moves is slightly higher for SPX down + VIX down than for SPX up + VIX up, although the difference is very small (it can get bigger and even inverse when looking only at individual years).

Another obvious observation when looking at the statistics is that the same direction days were more common in the 1990's than in the last decade – except for this year (so far – the data used for this analysis ends on 21 March 2013). The percentage of days with VIX going down when S&P500 goes down has been particularly high in 2013 – exactly 1 in 3 trading days when S&P500 declines. This is in line with the general downtrend in VIX that we have observed in the first three months of 2013.

Correlation of VIX and S&P500 is of course highly negative, but it is not perfect -1 (this is also quite obvious from the statistics above). Over time it fluctuates between -0.40 and -0.90. It has stayed between -0.70 and -0.90 for most of the last 10 years. Here you can find charts and detailed statistics on VIX-SPX correlation (all-time and in individual years).

Of course, many of the 20% trading days with the same direction in SPX and VIX are days when the market moves sideways and the moves are close to zero. However, there are also days when stocks make a bigger move up or down and the VIX still goes in the same direction.

The table below shows 20 days with the greatest positive change in S&P500 when the VIX index also increased. In general, you can find two categories of days here: 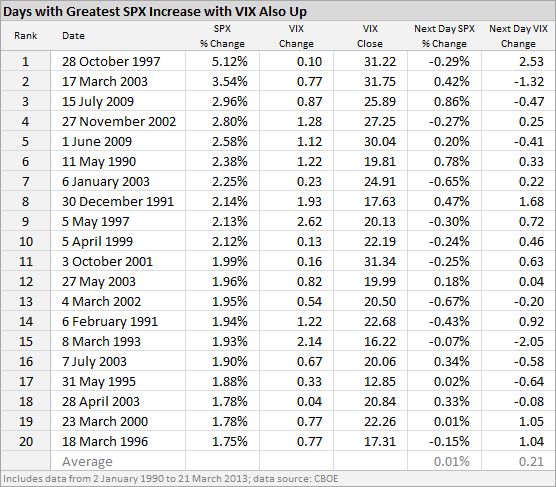 The last two columns in the table show S&P500 and VIX moves on the day following the day in the table. There is no directional edge in the S&P500 move, but there is slightly positive bias in the next day VIX move, although not statistically significant. The average next day moves are 0.01% for S&P500 and +0.21 points for VIX. These figures are -0.07% and +0.17 when looking at the top 100 days (not shown on this page).

You might have also noticed that VIX closing values on the days in the table are quite high (definitely above the long-term average VIX close of 20-21 – there are 4 days with VIX above 30 and only one with VIX below 15). Trading days were selected and ranked based on percentage size of?S&P500 up move. Bigger moves are of course much more common during times when the markets are volatile and VIX is high.

VIX Going Down When S&P500 Goes Down

Below you can see a similar table for days with the greatest decline in S&P500 when VIX also declined: 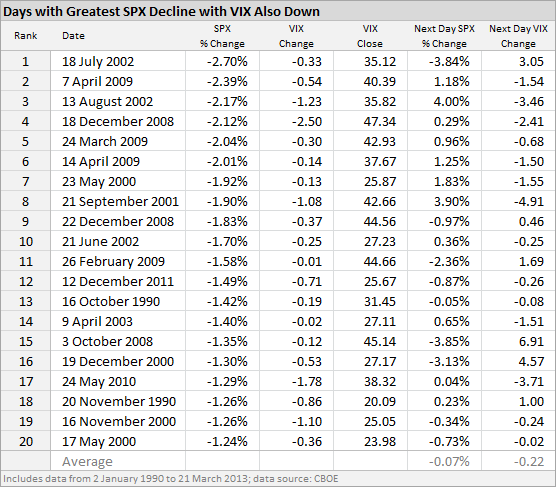 Notice the VIX closing values. There is no day with VIX close below 20, but there are 7 days with VIX above 40 (and that is after the decline on the particular day).