After the VIX (CBOE Volatility Index) closed lowest since June 2007 on Monday it recovered a bit and traded between 14 and 15 for most of Tuesday, Wednesday, and Thursday. It was falling Friday mid-day and again into close, and it ended this week at a new post-2007 low of 13.45. For a reference, historical volatility in the last 21 trading days has been 13.20.

The big picture on VIX futures curve has been the same for most of 2012, only now the whole curve is several points lower than it was in the first quarter, when the middle and long end were trading near 30.

In the chart below you can see how the curve looks now compared to 24 July and 1 August, days of recent VIX highs. 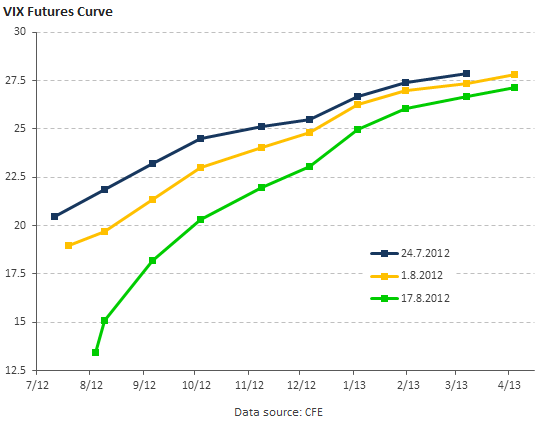 Unlike VIX, VXV Index Is Not at the Very Low

Although the VXV index has traded well below 20 for most of August so far, unlike VIX it is still slightly above its 2012 lows and 2011 lows (lowest closes were just above 17; this Friday the VXV closed at 18.35).