I will do my best to regularly update this page with remarkable new developments. If you need the latest figures, you can use the Historical Volatility Calculator, which I have also used for charts below on this page.

Historical Volatility of Apple Since 2009

Apple (AAPL) has been one of the most widely owned and traded stocks in the recent years and until recently a clear outperformer. For the three years from 2009 to 2011 it was trading in a nice investor-friendly orderly uptrend with very shallow corrections. This up move accelerated in 2012, especially in the first quarter or 2012 when Apple rose from 400 to 600 (50%) in 3 months. In the fourth quarter of 2012 Apple went through a deep correction from the high at 702 to low 500's, which has of course been widely discussed on Wall Street and in the media. 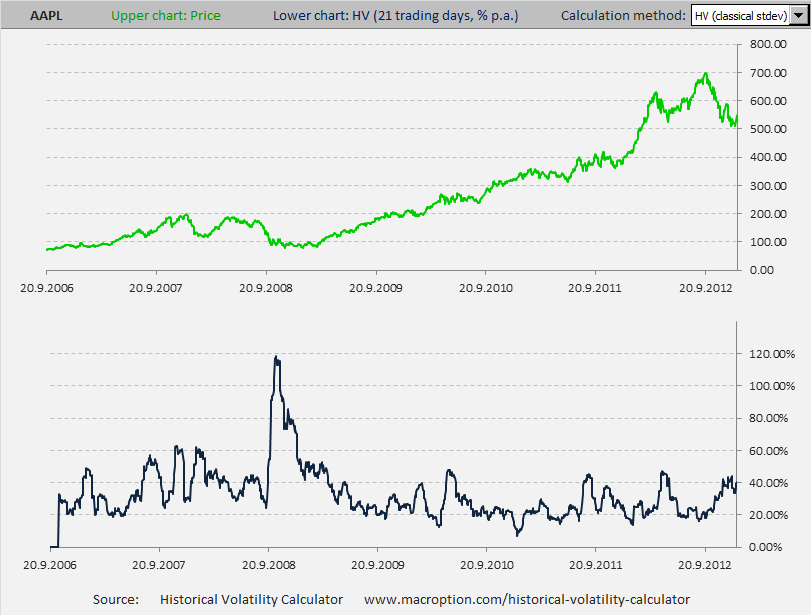 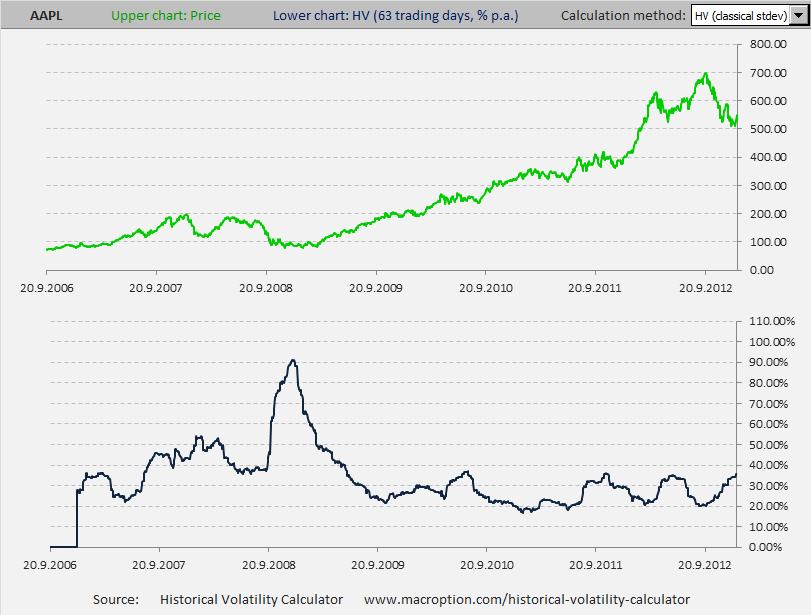 End of 2012 – Realized volatility of Apple started to increase after the stock reached its all time high in September 2012. At that time the volatility was well below 20% and it gradually grew to above 40% in November and December.

April 2012 – In April and May Apple stock underwent the first of the two big 2012 corrections, falling from 640 to 530 in 1.5 months. Nevertheless, the first day when 21-day historical volatility spiked above 40% was 25 April, when the Apple stock soared 9% on good earnings and overall market optimism (helped by comments from Federal Reserve chairman Ben Bernanke and other good blue chip earnings). The highest 2012 reading on 21-day historical volatility was 47.15% on 30 April.

August and October 2011 - A double peak in historical volatility occured in the second half of 2011, as Apple stock moved sideways in quite choppy way, struggling with the resistance at the psychologically important 400 level. It took Apple stock 5 months from 26 July, when the stock first closed above 400, to 23 December, the day after the last close below 400. The August peak in historical volatility was higher (45.29% on 29 August) than the October peak (38.19% on 27 October). The trough between the two peaks was 21.42% on 28 September.

May 2010 – Of course big part of this volatility spike can be attributed to the Flash Crash of 6 May. However, the 21-day historical volatility of Apple had more than doubled already before the Flash Crash: it was 32.65% on 5 May, compared to 12.77% on 14 April. It further increased in the days following the crash (as the low volatility April days dropped out of the trailing window) and reached high of 48.05% on 19 May. Apple stock price was around 250 in those days; its range on the Flash Crash day itself was 199-258. Also note that the Flash Crash was a textbook example of events that can't be fully reflected in historical volatility, as its calculation typically only uses closing prices. The closing price on the Flash Crash day was 246.25, down "only" 10 dollars from the previous day's close (255.99). Average true range would be a much better measure of volatility in this case.

January 2012 – below 15%, partly seasonal and in line with the whole market's low volatility (S&P500 historical volatility was below 10%).

Historical Volatility of Apple in 2008

Like other stocks and other markets, Apple experienced extremely high volatility in the last four months of 2008 during the height of the financial crisis. On 12 September 2008 21-day historical volatility of Apple was 24.59%, the only reading below 25% in the whole 2009. The stock was trading at 150 then, already way off its highs reached in December 2007 (199.83, intraday above 200).

In the next 4 weeks, following Lehman bankruptcy and all the other dramatic events, Apple stock fell below 85 and its historical volatility skyrocketed above 100%. It was the highest at 118.13% on 15 October 2008.