Can Volatility Be Over 100?

You are in Tutorials and Reference»Volatility

Can volatility be over 100? Most of the time when people are asking this question they actually mean if volatility can be over 100 percent p.a., because in finance volatility is usually measured and quoted in percent annualized.

The short answer to this question is: Yes, volatility can be over 100%.

Volatility can theoretically reach values from zero (no volatility = constant price) to positive infinite. Here you can see why volatility can not be negative.

Volatility over 100 in Reality

Volatility over 100% is not very common for most securities and indices, but it does occur quite regularly somewhere in various parts of the markets. Very often you can see volatility over 100% on some small cap stocks or shares in companies having problems at the moment.

Example of Volatility over 100: Morgan Stanley

Once in a while volatility goes up near or above 100% also on blue chip stocks. A still quite recent example was the second half of 2008, espeically the weeks following the bankruptcy of Lehman Brothers and problems of other financial companies. Below you can see a chart of Morgan Stanley (MS), a company that did not go bankrupt during the financial crisis, but it also had big problems and its stock price was very volatile. Stock price is the upper green chart and 21-day realized volatility is the bottom blue chart. You can see that the volatility was over 300% at one time (September-October 2008). 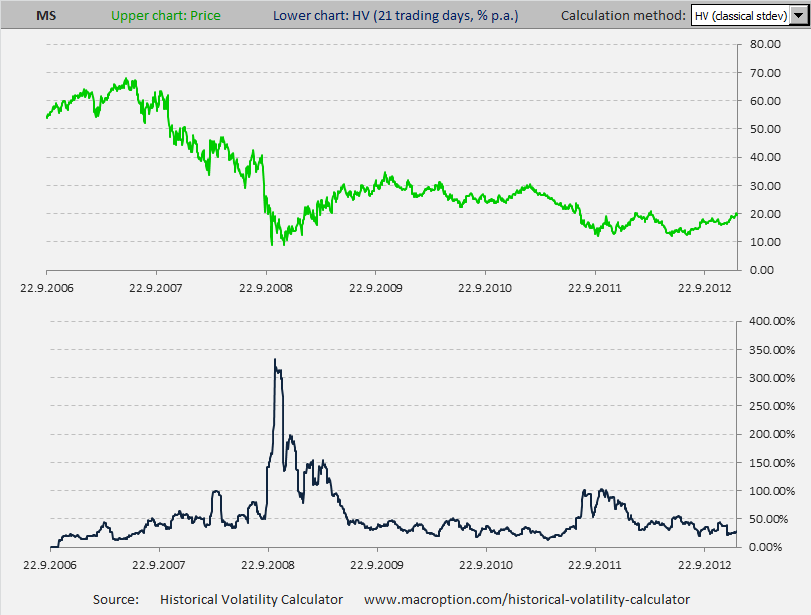 You could find a similar price and volatility pattern during the 2008-2009 financial crisis on most other financial stocks and also on many stocks in other sectors. Major US indices like the Dow Jones or S&P500 also had big spikes in volatility, although in their case it peaked in the 80's and did not get above 100.

Below you can see a similar chart of S&P500 price and 21-day historical volatility since 1980. Notice that in the 1987 stock market crash volatility peaked just above 100. 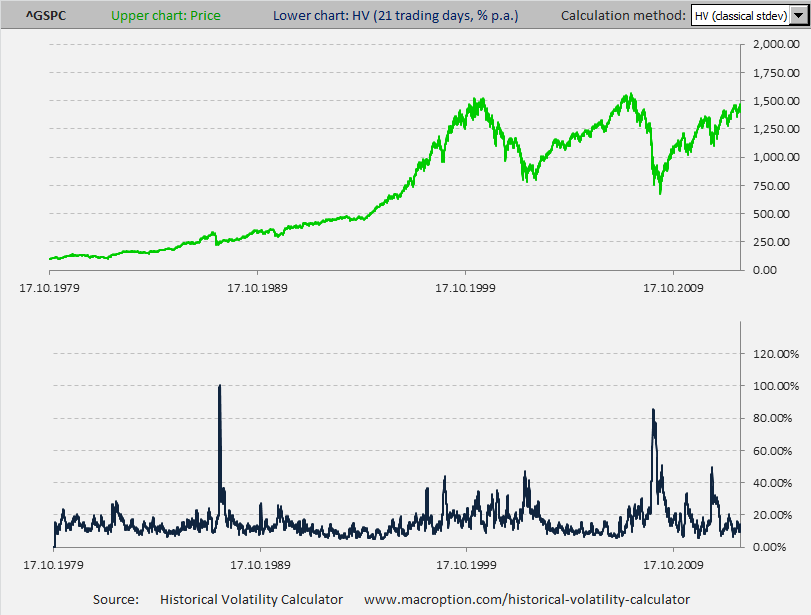 Also note that volatility values depend on the time period you are using to calculate it. Below you can see two other charts of the same index (S&P500) with historical volatility measured over 5-day (first chart) and 63-day period (second chart). 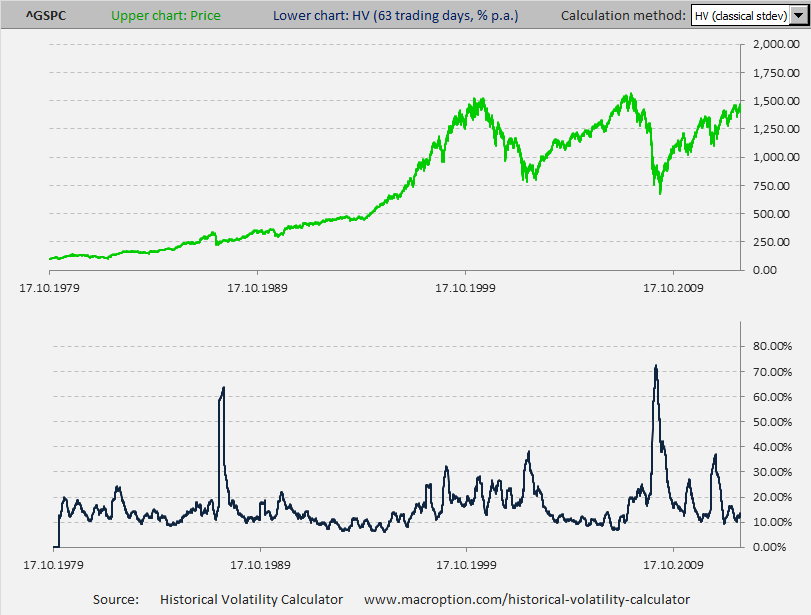 When volatility is calculated over longer periods, the extremes get more smoothed – in the same way as the period length setting works with moving averages and other technical indicators. In case of S&P500 63-day historical volatility you can see that the peak in 2008 was actually higher than that in 1987 (because the "crash" in 2008 took several weeks, while the 1987 volatility was more concentrated).

Historical volatility in all the charts was calculated using the classical method (standard deviation of logarithmic returns) in the Historical Volatility Calculator.