One week ago S&P500 crossed below its 50-day moving average, which is a technical signal widely followed even by many non-technicians. For most of the last week S&P500 was trading just below the MA50, but on Friday it closed above. Overall there has not been any decisive move to either side.

In the volatility markets the main event of the week was August VIX (and other CFE traded products) expiration. The final settlement came in at 16.42 – the second highest year-to-date (after 17.22 in June) and more importantly very high given the spot VIX range in the last 1-2 months.

VIX final settlement value is determined at open on the expiration day (usually Wednesday), but it is often different from spot VIX open – see explanation here.

Below you can see the current curve (green) compared to 8/13 curve (blue; last 3 weeks low with spot close at 12.31) and 8/20 curve (yellow; the close before August expiration). In the table you can also see how the curve flattened since 8/13.

Futures expiring in January and February 2014 have been the weakest. So far, on both short and long end, the recent spike has been comparable to the spikes in spring, but not to the big one in June.

The latest COT report (positions as of Tuesday 20 August) shows that large speculators did not reduce their VIX shorts during the correction. Non-commercials net short position slightly increased week-to-week to new record of 116,317 contracts: 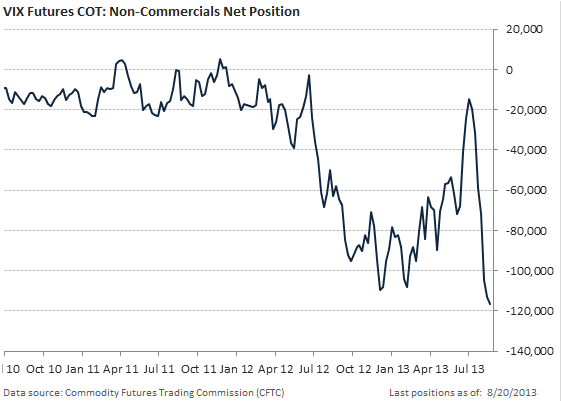 Measured as % of total VIX futures open interest, it is still a bit smaller than the record net shorts in December 2012: 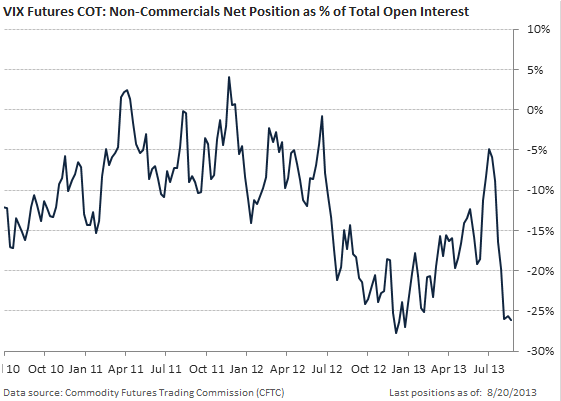 Interestingly, the fundamental story now is not unlike December 2012 – a government/Fed event with known date and potentially large market effect on the horizon. Now we are awaiting the possible Fed tapering, which according to many investors and analysts may increase volatility in the near future (and it seems that large speculators are not betting on that scenario). Last December it was the fiscal cliff issue that got the attention of the markets.