I’m sure you have seen enough “sell in May and go away” analyses and blog posts in the recent weeks, but looking at the impressive YTD performance of US equity indices I couldn’t resist and ran the numbers myself. I have looked at the full history of the Dow Jones Industrial Average (since 1897, because in 1896 the index started only in May).

Sell in May and Go Away vs. Buy and Hold

Strategy 2: “Sell in May and Go Away” – Sell stocks every year by 20 May close or the close immediately before 20 May if that was a non-trading day (If you were doing this strategy, you would be selling at today’s close). Stay out for the rest of the year, and buy stocks back at close of the last trading day of the year. Repeat every year (green line). 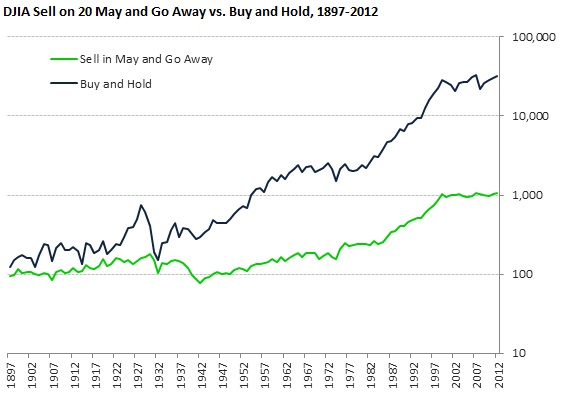 You can see that Buy and Hold outperforms Sell in May and Go Away by wide margin. The performance does not include dividends. It does not include interest on idle funds (from May to year end). And it does not assume rebalancing costs (when index composition changes).

You can see that Sell in May and Go Away reduces the risk a little (lower standard deviation and maximum drawdown). This is even more significant when taking only the last cca 50 years into consideration: Since 1958 maximum drawdown of Sell in May and Go Away has been below 20% and since 1975 it was above 10% only once (10.40% in 2010). It would have saved most of your portfolio from the dot-com bubble burst as well as the post-subprime mess. The Buy and Hold drawdown was 27.45% in 2002 and 33.84% in 2008. Note that the drawdown numbers, as well as the standard deviation, only look at the end of year balance and don’t take intra-year volatility into consideration.

Nevertheless, in sum, the overall performance gap is too big to justify the reduced volatility with the Sell in May strategy. To most investors it’s not worth it, at least when looking at the whole history of the Dow.

The favourable risk statistics for the Sell in May strategy in the last decades made me look at how the two strategies compare over shorter periods, namely (trailing) 10 years and 20 years. See the charts: 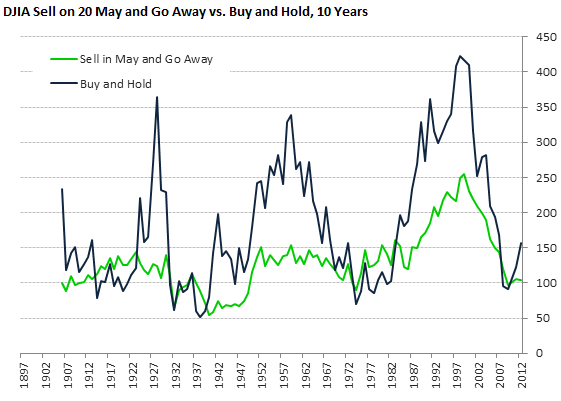 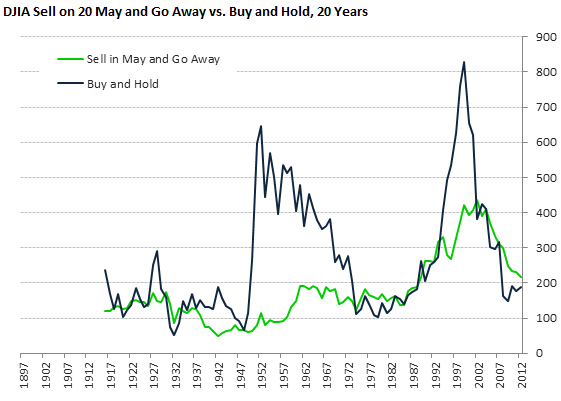 You can see that there have been longer periods of time when the Sell in May strategy outperformed Buy and Hold. One of such periods is the 20-25 years ending now.

However, the differences in performance are relatively small in such cases, compared to the sometimes enormous differences in the other direction, including the 20-year periods ending in the 1950’s (and well into the 1970’s) and the 20-year periods ending around 2000, when Buy and Hold had outperformed Sell in May. Not surprisingly, the Buy and Hold strategy is beating the Sell in May by the widest margin during long bull markets (you don’t want to stay out during a bull market).

When YTD Performance in May Seems Too Good to Hold

What if the performance in the first 4-5 months is so good that it seems that a correction is inevitable? Like in 2013, when the Dow has increased 17% already. Should you sell this “overbought” market? 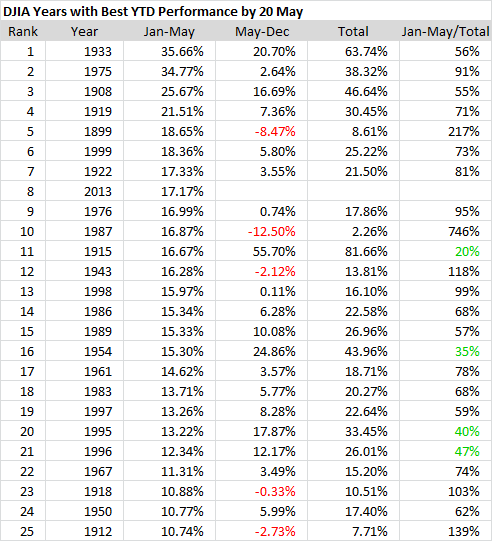 The most important observation is that exceptionally good performance until May does not imply poor performance during the rest of the year – quite the opposite. Among the top 24 years (2013 not included) there are 5 years with negative performance from May to year end, but:

The only years with dramatic losses from May to year end after a great YTD performance in May have been 1899 and 1987. The latter is of course the year with the Black Monday crash (19 October 1987).

At the same time, a great performance until May is hard to beat (or even match) during the rest of the year. The last column in the table above shows how many % of that particular year’s (dollar) gains were made until 20 May. In all but 4 out of the 24 years, more money was made until 20 May than during the rest of the year. Furthermore, in one of those 4 years (1996, rank 21) the percentage gain from May to year end was slightly lower than from year start to 20 May.