Sell in October and Go Away (No Way)

With the markets at all-time highs and less than a fifth of trading days left in 2013, it’s time to look at historical statistics again and see if there is any guidance for the rest of the year. In May, at the height of the “Sell in May and go away” discussion, I published my piece of analysis on that. Let’s now look at a similar “Sell in October and go away” strategy. As usual, we’ll leave the speculations and reasons to other analysts and focus only on hard data.

Let’s first look at average performance of the Dow Jones and S&P500 from the beginning of the year to 22 October vs. from 22 October to year end.

We should of course take into account that the period from January to 22 October is more than 4x longer than from 22 October to year end and compare annualized performance.

The year end has shown 2x (median) to 3x (average) higher returns than the period from the beginning of the year to October. Not surprisingly, the results are very similar for the two indices when comparing the same time period (DJIA has much longer history than S&P500).

One figure that deviates from the others is the average year end performance of the Dow when looking at the whole history since 1897. This can be attributed mostly to the Great Depression years (1929, 1930, 1931 all in top 6), but there were other ugly years a hundred years ago. Note that there is only one post-WWII year among the worst 11, which is 1973 (and 1974 is rank 12). The 23 years listed below are the only years when DJIA performance from 22 October to year end was worse than -2%. The worst year end in the last 35 years has been 2007 with -2.23%. 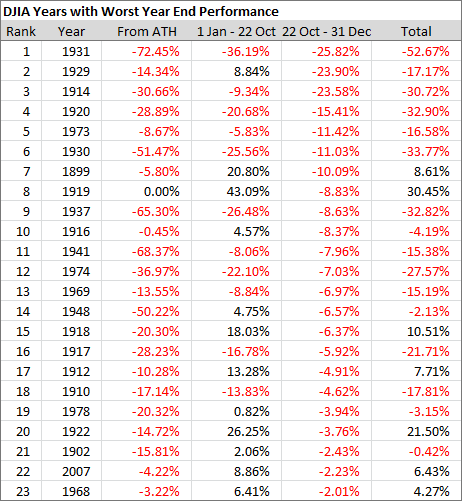 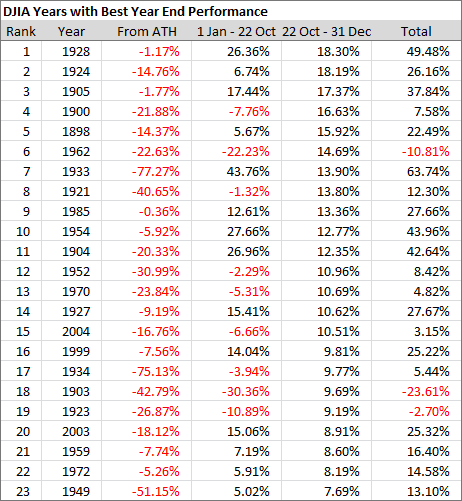 For an investor it is much more important to look whether the good year-to-date performance that we have seen this year has any significance for predicting the year end performance. For this we will look at S&P500 data rather than the Dow, as one of the characterstics of 2013 has been a wide performance gap between the two indices (23.03% vs. 18.04%). By 22 October, year 2013 ranks 6th in S&P500 history.

The picture for performance going forward is very similar to what we saw in May. In the years with very strong positive performance until 22 October, it is very likely that the market will keep growing into the year end, although the returns have been in low single digits in most years. There have been five negative year ends among the top 23 years (top 22 without 2013), but none of them worse than -2.09% (1988). Also note that the market was very close to its all-time highs in most of the top years (the third column with mostly red numbers shows 22 October closing value compared to all-time closing high). 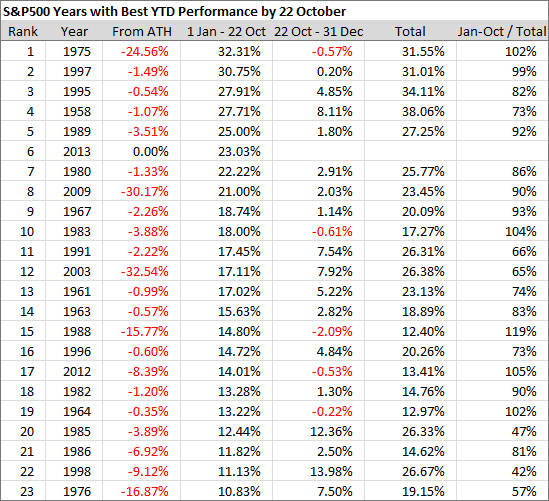 Nevertheless, year end performance has been almost as good in other years and YTD performance in October has not been significant for predicting year end return. Average non-annualized S&P500 return from 22 October to year end has been 3.19% for all years and 3.77% in the 22 years with strongest YTD performance. Below you can see the scatter plot. 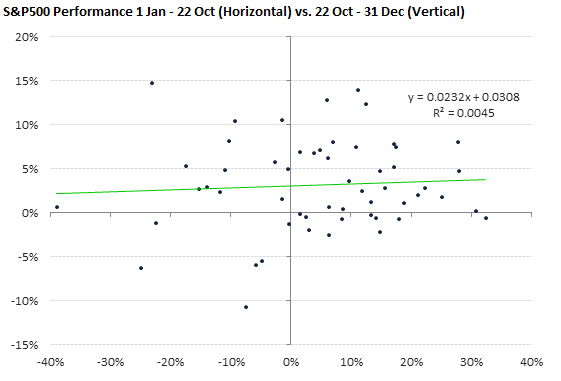 Another thing that comes to mind when looking at the scatter plot is that big changes (over 5% or under -5%) have been much more frequent on the positive side than on the negative side at year end.

The last chart below shows how much a 100 dollar investment would be worth after 10 years if you stayed invested the whole time (blue line) vs. got out of the market on 22 October and back in at year end (green line). There was no 10-year period when the “Sell in October” strategy outperformed buy and hold. 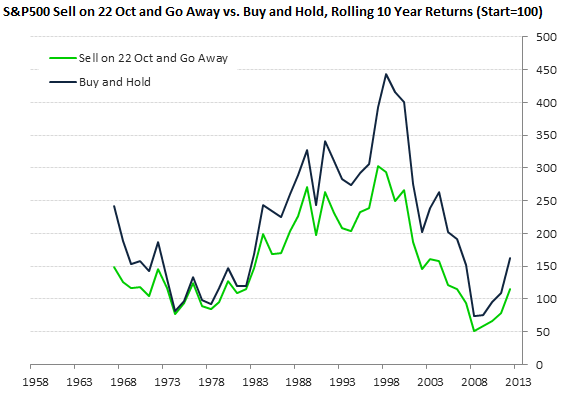 But of course, the sample is small and this year can be different.